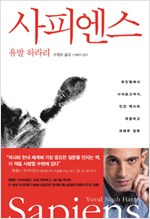 We weren’t always the only species of human being on Earth. Roughly 100,000 years ago, there were actually six varieties of people, but homo sapiens were the only ones who made it to today. How come?

“Both Melinda and I read this one,” Gates said, “and it has sparked lots of great conversations at our dinner table. Harari takes on a daunting challenge: to tell the entire history of the human race in just 400 pages.”

But Harari doesn’t dwell on the past. He looks toward a future in which genetic engineering and artificial intelligence make our definition of “human” even more fluid.

From Gates: “I would recommend Sapiens to anyone who’s interested in the history and future of our species.”